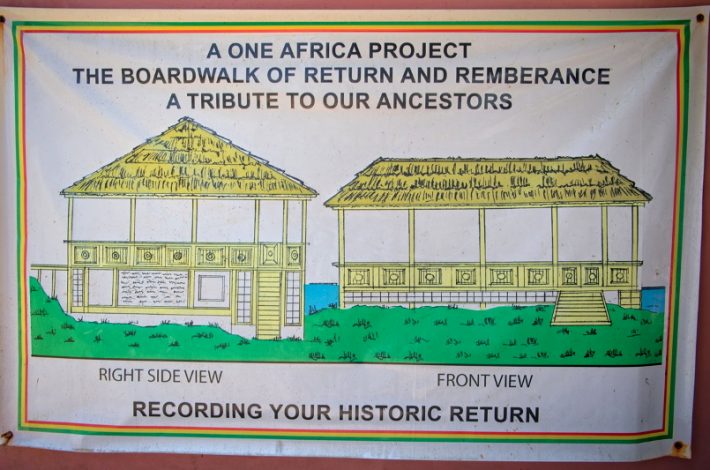 ONE AFRICA Health Resort and Restaurant is proposing to expand and build a monument facing the Gulf of Guinea, with an awesome view of the historic Elmina Castle Dungeons in the distance, as a tribute to those ancestors who perished and were taken away from Mother Africa, and a recorded welcome home to African Ascendants.

One Africa is located on the Gulf of Guinea, in the ancient village of Iture in Elmina and is geographically located between two major edifices that brutally housed our ancestors in damp, dark and rodent infested dungeons of the Cape Coast and Elmina Castle/Dungeons.

One Africa’s objective is to erect a monument that will include the names of our people who are making their pilgrimage and/or planning to return home to “Mother Africa”, while paying tribute to those who paved the way for our return; the many thousands upon thousands of Africans who lost their lives in the forced and brutal crossing of the Atlantic Ocean to parts unknown to them.

The Boardwalk of Return & Remembrance Monument & Restaurant will seat more than fifty (50) people and will be built using mostly natural materials i.e., Bamboo, Thatch, Wood, Latrite and Marble.  The cornerstones and pillars of the building will be erected using Marble. There will also be two Marble walls, each facing one of the castle-dungeons, onto which the names of contributors and donors will be carved in gold colored lettering, similar to the wall in Washington, DC which memorializes the men and women killed in the “Police Action” Viet Nam War.

Africans both from the Diaspora and the continent have achieved the impossible and are entitled to significant recognition when compared with the best abroad for they have achieved and excelled in spite of the lack of opportunity in education and the proper recognition of their talent.  The recognition has been begrudgingly granted and compensation extremely small, or not at all.  If African Americans / Africans of the Diaspora / Africans had all the doors to recognition and honor opened to them, only the imagination can figure out what more they might have achieved.  When the Slave Traders robbed Africa of its Human Resources / Human Cargo they unwittingly spread African Culture throughout the Western world.

Africans have a highly developed sense, a philosophy of life and like the other peoples of the world are human but unfortunately the enemies of our race have preserved the record of only the evil and at the same time belittled whatever good we have accomplished.

Consequently, we as returning African Ascendants (who no one ever thought would return home to “Mother” Africa) should unapologetically acknowledge and celebrate our return, not only for ourselves but for our children, grandchildren, great grandchildren and those yet unborn.

The project will cost $40,000.00 US Dollars to complete and we are asking African Ascendant brothers and sisters and families to get financially involved and be a part of this historical project, having your name/s forever etched in stone to celebrate your return home to Mother Africa and your honoring of our ancestors.

$500.00 or more – names carved on one of the four Marble Cornerstones.

Every donor/contributor will also receive a fine dining experience in a historically unique and spiritually vibrant atmosphere, with a delicious, high quality and magnificent meal of their choice (for two), from our multi-cultural cuisine.